REVIEW: THE CITY & THE CITY BY CHINA MIÉVILLE 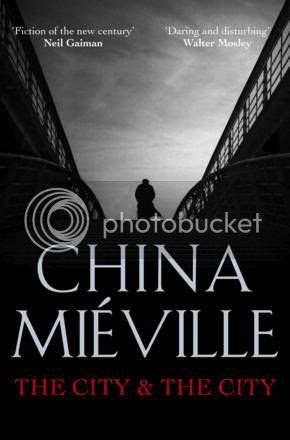 When the body of a murdered woman is found in the extraordinary, decaying city of Besźel, somewhere at the edge of Europe, it looks like a routine case for Inspector Tyador Borlú of the Extreme Crime Squad. But as he probes, the evidence begins to point to conspiracies far stranger, and more deadly, than anything he could have imagined. Soon his work puts him and those he cares for in danger. Borlú must travel to the only metropolis on Earth as strange as his own, across a border like no other.

This book is in a way rather schizophrenic, or at least it wants to be. At its heart is a Crime story, and it is seemingly set in a fantastical landscape of parallel worlds.

The crime part of the story is unfortunately mediocre and unoriginal. I've read a lot of crime and I've read this crime-story several times before. The tired crime-cliches of the police detective who goes his own ways, the female assistant who will go to any length for him, and several others are here. The crime itself, and the solution to it is pretty standard for a crime novel too. So in isolation the crime aspect of the story is nothing more than your average crime novel.

The Fantasy or Science-Fiction elements are what should set this book out from other crime novels. It is however debatable whether there are any SFF elements in the book at all, apart from that it is set in a fictional city in a fictional land, something that usually is not enough to make something SFF.

I really liked the idea of the "unseeing" that Miéville introduces in the book. Unfortunately it never gets past the idea-stage. Several times in the book we are told that "unseeing" has to be learned, and that the "two" cities exist not in one place, but are divided by some unexplained lines. We even get told that while "unseeing" you may step over the people you "unsee", so it's basically just ignoring things.
And this is where it all falls apart for me. The idea is great, but without further exploration of how it came about and why, it's just a lazy macguffin. A bit like saying the sun turns Clark Kent into Superman without any further explanation as to how and why.


It does not help either that when it is needed to put a twist on the plot, in Part 3 of the book, we get an explanation of the "borders" between the "two" cities that is at odds with the earlier one. The introduction of "Breach" just adds to the poor execution of the good idea that is in this book. More so when we never get an explanation for how they know someone is "crossing borders", something that is the only thing keeping those "borders" up.


The only thing that saves this book from being total crap is a interesting concept, and Miéville's excellent technical writing skills.
But I would not recommend you read this book if you don't want to read it as an example of how a great idea and excellent technical skills are useless when the story is flat and badly realized.
This reads as a mediocre crime-story with an idea for the first two thirds of a urban fantasy novel plastered in to discuise the lack of originality.


Although this book didn't work for me, I will give China Miéville another chance at showing me he isn't a has-been by reading "Kraken" soon.