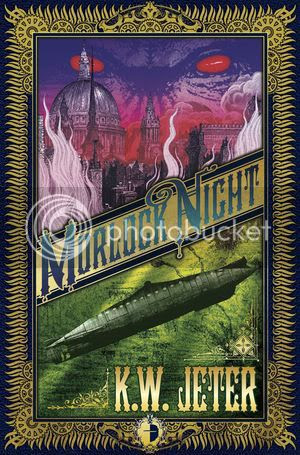 JUST WHAT HAPPENED WHEN THE TIME MACHINE RETURNED?
Having acquired a device for themselves, the brutish Morlocks return from the desolate far future to Victorian England to cause mayhem and disruption. But the mythical heroes of Old England have also returned, in the hour of the country’s greatest need, to stand between England and her total destruction.

This book starts out right after events in H.G.Well's The Time Machine. And it does
seem from the first chapter that this will be a direct sequel. But it soon turns out this is not the case.
Jeter manages to bring in elements of post-apocalyptic science fiction, Arthurian legend and a lost underworld reminiscent of Jules Verne's Journey to the Centre of the Earth and mix them together to make a thrilling story. Jeter's writing drives the story along all the time, and the choice of first person narrative works perfectly.
There are several places in the book that the story takes an unexpected turn, and that is one of its strengths. Another is Jeter's take on the Arthurian legend, something I really fell for. I'd go so far as to say that this is an essential book for anyone with more than a passing interests in Arthurian legend.
Steampunk fans will also be glad to know that there are quite a few steampuk elements along the way too.
I really enjoyed this book and thought it was a great read. Both as a (sort of) sequel to The Time Machine, and as an original story in itself. I felt that the connection to The Time Machine is almost incidental. It does not suffer if you know nothing of H.G. Wells' novel when you read it.
I don't hesitate to recommend this book, and will leave you with the final of my review notes on the book:   Did absolutely not see that end coming!
NOTE: An ARC of this book was supplied to me by the publisher.
Links: K. W. Jeter  Angry Robot Books
Posted by Weirdmage at 12:18 No comments:

You may have noticed that this blog has been in stasis for the last four months. This has mostly been due to my internet being horrible in that period. I tried blogging several times before giving up and waiting for my internet to stabilize. Hopefully it is back to the way it should be now.

I was planning this to be my first post, followed by a review later today. But as you may already have seen, I felt I just had to write this post as soon as my curiosity led me to find out about something strange with one of this years Hugo winners. I also planned on this post going up yesterday, but lousy internet and the need for sleep delayed it until now.

Back to what is happening with the blog. I plan to do at least three post a week, at least two of those will be reviews. And it is highly likely that I will do some articles and opinion pieces fairly regularly.
I don't think you'll notice any huge differences if you used to read the blog before my hiatus. But I will do some reviews outside the SFF genre in the future, and I have already plans for an English language review of a Norwegian book that has not been translated into English yet. And I might do more of those if it's a book that I feel is interesting to people elsewhere in the world.

Later today will see my first review in a long while posted. (Unless my internet decides to not work again.) I hope you will follow my blog in the future. Any comments and suggestions are welcome by the way :-)

Email ThisBlogThis!Share to TwitterShare to FacebookShare to Pinterest
Labels: Blogging

HUGO SCANDAL: INELIGIBLE DOCTOR WHO EPISODE GETS A HUGO.

HUGO SCANDAL:
INELIGIBLE DOCTOR WHO EPISODE GETS A HUGO.
So, on Saturday August 20 2011 the Hugo Awards were handed out at the 2011 Worldcon, Renovation, in Reno, Nevada.
Including those honoured was the Doctor Who season 5 finale "The Pandorica Opens/The Big Bang". There is however a rather big problem with this award, namely the rules of the Hugo awards. I quote Article 3, Section 3, Paragraph 8 (3.3.8):

3.3.8:   Best Dramatic Presentation, Short Form. Any television program or other production, with a complete running time of 90 minutes or less, in any medium of dramatized science fiction, fantasy or related subjects that has been publicly presented for the first time in its present dramatic form during the previous calendar year.

(This is from 2009, but I assume that if the rules were changed last year they would have had time to get them online. EDIT: I found the 2010 rules, they are linked to further down in the article, they still say the same.)

The important part of 3.3.8 is of course "with a complete running time of 90 minutes or less". According to Doctor Who - The Complete Guide the episodes are 50+55 minutes. It was hard to find something online, but I managed to find out these actual running times: The Pandorica Opens at 48:43 and The Big Bang at 53:14. Making for a total of 101:57, or almost 12 minutes more than the Hugo Award rules allow for. (The running times I quote supposedly includes credits, and a few seconds before and after each episode according to my source. But that does not even come close to 12 minutes.)

So why was I even checking this? I was thinking that a double episode of Doctor Who was longer than an animated movie. And it did not make sense to me that Toy Story 3 and How to Train Your Dragon were considered long form when a double episode of Doctor Who was considered short form. I also know that animated movies are frequently as short as 75-80 minutes, so I wanted to see where the Hugo Award rules drew the line.  And that line is 90 minutes, as you can see from the excerpt from the rules above.
(For clarification, Toy Story 3 is 103 minutes, and How to Train Your Dragon 98 minutes according to IMDb.)
I find it absolutely incredible if this has passed through the verification test for Hugo Award ineligibility. I thought maybe the rules were changed last year, but there's no rule change according to this. (The link will take you to the 2010 WSFS Constitution, that for some eason is not up on the WSFS website.)
That this has slipped through unnoticed, it is a scandal. And for the Hugos to retain any credibility at all, they should immediately ban the person responsible, at least from serving in any sort of official capacity for the Hugos/Worldcon, preferably from attending for a few years. The same if multiple persons are responsible. This is not something that should happen in even the most amateur organisation, and certainly not to a prestigious Award.
I'm waiting to see what happens now. And I would love to get a comment from anyone associated with the Hugos.
From what I can see the Hugo Award for "Dramatic Presentation, Short Form" has to be changed. And I have no idea how they plan to do that.
Lastly, it seems the real winner in this category is: Doctor Who, season 5, episode 10: Vincent and the Doctor. Unfortunately for the Hugo Awards, this episode has a different director and scriptwriter.

UPDATE: After trying to find out if an exception has been made I found out that there is a rule that would allow this double episode in the short form category:


"3.2.10: The Worldcon Committee may relocate a dramatic presentation work into a more appropriate category if it feels that it is necessary, provided that the length of the work is within twenty percent (20%) of the new category boundary."
I have tried to find evidence online that this rule was used. So far as I was able to ascertain no move from long form to short form was made, and if it was there is no record of it online. (This includes any note on the voting form about it.) And I must assume that my initial findings that the winner is ineligible stands.
Posted by Weirdmage at 03:27 14 comments: