REVIEW: WHAT THE NIGHT KNOWS 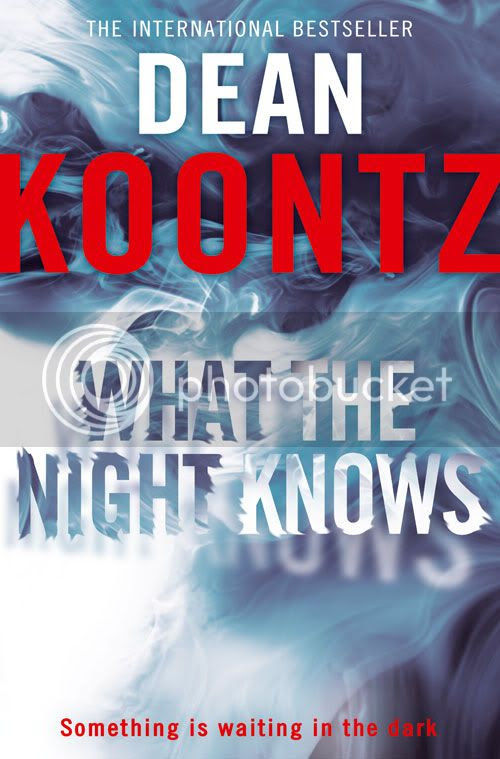 Death is not always a one-way journey
Billy Lucas is a sadistic killer and proud of it. He is only 14 years old. So how does he know so much about a series of murders committed before he was born?
Detective John Calvino comes away from interviewing the boy with a terrible sense of dread. That night he feels that somehow Billy has come home with him.
This haunted feeling only gets worse in the weeks that follow. And when another killing spree begins, Calvino becomes convinced his own family will be the next victims. Billy might be safely locked u, but something is stalking the night...

Koontz doesn't waste anytime establishing the mystery in this story. In fact he's revealing things a bit too soon, fifty pages in we have already leaned something that I think would work better if kept hidden for a longer time. But this is in many ways redeemed by the eerie atmosphere that is created, an eeriness that pretty much stays with you throughout the whole book.

There are lots of supernatural happenings in this book, in fact it is a story about a supernatural series of events. This premise is really interesting but it doesn't really evolve from the initial premise, and thus it feels a bit stilted and unoriginal. The unoriginal feel isn't really helped by Kontz's need to place the spirit of a dead retriever in the story (, for what feels like the 200th novel in a row).
I also felt that the rooting of the supernatural happenings so firmly within the Christian tradition hampered it a lot. The Christian aspect of Koontz's novels have been getting stronger lately, and I feel that he is placing his novels in a "Christian Horror" category, and in my opinion this makes them much weaker than they could have been.
I am well aware that not everyone will have a problem with this, and I am sure Christians will find this a great addition rather than the detraction I found it to be.

Ignoring the Christian aspect of it, the story itself is a good one. Koontz knows how to write good Horror, and he does that here. The atmosphere is great, and there's plenty of action and suspense.
When it comes to the characters, they are not so good. They feel very stereotypical, and lack in depth. The main character, John Calvino, has a family that is so standard, and perfect, that it almost becomes more unbelievable than the supernatural elements. And one of his children seem to exist solely to be so stupid and naive that the events that center around here doesn't require much exploration.

Overall this is a good book for Horror fans, especially those who want their Horror to have a firm supernatural base. As mentioned above it has a strong Christian leaning, and for Christian Horror fans I think this will be near perfect. For others, it will stand and fall depending on your feelings about the Christian elements. But if you don't mind Horror having that angle, I will recommend you pick it up. It is a great supernatural Horror story.


DARKNESS UNDER THE SUN
This is a fifty page bonus story that is available separately in electronic and audio editions, but is included in the edition of What the Night Knows I have.
This is a companion piece to the main story, and is directly connected to it. As companion stories go, this is a really good one. It gives us much more information about one of the main characters in What the Night Knows, information that really makes him come to life much more vividly.
The other main character here, not present in the main story, is very interesting and his history is very well fleshed out for such a short story.
In some ways I wish I had read this story before What the Night Knows, it was published before the novel came out, but then again I am not sure if it really would have made much sense if it was read as a standalone without being aware of the main story.
If you have an edition of What the Night Knows that does not contain this, and liked the novel, I would urge you to get it.
LINKS: Dean Koontz  Harper
Posted by Weirdmage at 07:52 2 comments:

WHY I HAVEN'T POSTED IN A WHILE.

It's been a while since I posted on the blog, and that has not been my intention. I've had trouble with my internet again, and I have really hated not being able to post anything since April. I had plans to get my own internet, instead of the one that I use now that belongs to my landlord, earlier this year after having internet trouble last year. But when I checked out the prices I found that I had to pay about $250 for the box I need to get it. For me that is quite a lot of money, so I delayed in the hope that things were fixed. Unfortunately that turned out to not be the case.
I've now made the decision to get my own internet, and that should be up and running within three weeks. I'll post when I can up to that time, but I can't guarantee that the internet I have now won't be down again. But hopefully I will be able to get some reviews and other posts up before that.

Hope you have some patience with me, and that you continue to read the blog.