REVIEW: DOCTOR WHO: ENGINES OF WAR 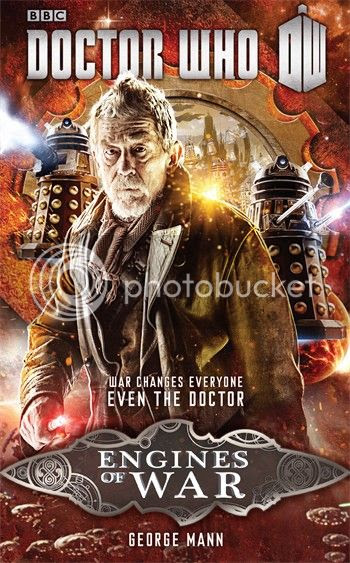 DOCTOR WHO:
ENGINES OF WAR
BY
GEORGE MANN


“The death of billions is as nothing to us Doctor, if it helps defeat the Daleks.”

The Great Time War has raged for centuries, ravaging the universe. Scores of human colony planets are now overrun by Dalek occupation forces. A weary, angry Doctor leads a flotilla of Battle TARDISes against the Dalek stronghold but in the midst of the carnage, the Doctor’s TARDIS crashes to a planet below: Moldox.

As the Doctor is trapped in an apocalyptic landscape, Dalek patrols roam amongst the wreckage, rounding up the remaining civilians. But why haven’t the Daleks simply killed the humans?


Searching for answers the Doctor meets 'Cinder', a young Dalek hunter. Their struggles to discover the Dalek plan take them from the ruins of Moldox to the halls of Gallifrey, and set in motion a chain of events that will change everything. And everyone.

This book isn't just a Doctor Who novel. This is our second ever look at the War Doctor. And there is no mistaking this for anything other than a war story. Although not so much a set battle one, more a small special forces engagement in a huge war. That's not to say there aren't any large engagements in this story, there is in fact some major battle action going on in these pages. The word Battle Tardis is used several times and it signals a quite different side of the Time Lords than the one we have been used to seeing. This is a glimpse into the much talked about Time War, and also our first look at how the War Doctor functions as the only Doctor Who in a story.

I say only Doctor, because the War Doctor doesn't work on his own here. As you can see from the above cover cope he meets a young woman, Cinder. She's not a standard Doctor Who companion, but more of a battle comrade. Actually she does more fighting than the Doctor himself does in the course of this story. Cinder is an interesting person to get acquainted with, and she is a needed human insight into the story of the war between the Time Lords and their enemy the Daleks.
Mann avoids making Cinder a standard female Science Fiction warrior although she at times seems like she is about be one. There are some parts of her backstory that feels like it lacks a bit of originality. But let's be honest here, she really exists in this story as a companion rather than a totally separate character, and she is a very good companion. She can more than hold her own, and you feel that she really does have an effect on the Doctor.

For me it isn't a completely new experience to read about a Doctor I hardly know anything about, but in this instance I share that with everyone else. We are actually getting a completely new Doctor here, at least in a solo adventure. It's sort of a strange experience meeting someone who is so familiar, and yet not quite the same as you are used to. This feeling struck me more than in the regenerations I have seen on TV. The lack of visual aids means that this incarnation of the Doctor is to a much larger degree dependant on how he acts rather than how he looks.
In my opinion, Mann has managed to give us a great second look at the War Doctor. We are only watching a short event in a long war here, but we get a good glimpse into what it is with this regeneration that formed those that came after it. It's not a hundred percent fully formed character we are presented with, but we still see enough that at the end of he novel you have a quite good idea of who the War Doctor is, and what makes him tick. It's a glimpse that whets the appetite, and I hope we will get to see more of this Doctor in the book universe in the years to come.

The story is of course also important. There's no ignoring that it incorporates some elements that will be familiar to someone who is familiar with Doctor Who. I've already mentioned a new companion, in the shape of Cinder, and that the Daleks are the enemy is evident by a quick glance at the book's cover. There is however many elements that are not such a staple of a story about the Doctor. The immediately obvious one, and one that I have already mentioned, is that this is a war story. The Doctor starts out this story on a war footing, and we have no time spent of him figuring out his exact whereabouts, or what he is supposed to/can do where he is.
From the above you'll probably gather that the  "discover phase" of a Doctor Who story is absent. For me that felt a bit strange, the finding out what is going on is a prologue I have become used to in the Doctor's stories. It does however become clear that this does not detract from the story at all. Being thrown into the action in the way we are makes for a plot that is action-loaded from the start, and it continues in that vein for most of its length.
There is certainly some passages here that are more sedate in pace than a battlefield story, but they add more to the dread of war than anything else. We get to see what the Time Lords are like at war, and we see some sides to them that are very interesting.
I won't go into what the Doctor ultimately ends up doing, but the way there is a good one. There is plenty of tension in what we are presented with. And there are some twists that keeps the level of suspense up throughout the novel.

All in all this is a great first look at the War Doctor solo. Mann tells a really good story that has plenty to offer both Doctor Who fans and Science Fiction fans in general. I thought this was a great read, and would recommend it as a good starting point for anyone who hasn't read any Doctor Who. And if you ever have wondered about the Time War, there is no getting away from going out and getting this book.

NOTE: A US edition will be out 9 September 2014 from Broadway Books/Crown Publishing.


ANOTHER NOTE: I was provided an e-ARC of this book by the publisher through NetGalley.

REVIEWS: You can find my other Doctor Who reviews here.