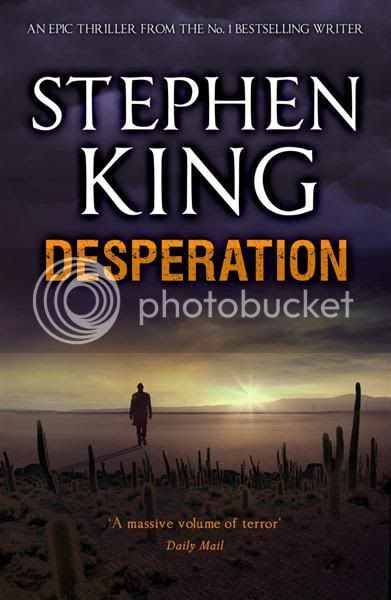 Welcome to Desperation. Once a thriving copper mining town in the middle of the Nevada desert, Desperation is now eerily abandoned. It's the last place that travellers like the Carver family, bound for vacation, and writer Johnny Marinville, astride his Harley, would expect to be stopped and charged. But Desperation still has a local cop - a unique regulator who patrols the wilderness highway.

The secrets buried in Desperation are as terrifying as the forces summoned to encounter them. A terrifying transformation is taking place and the travellers will soon discover the true meaning of Desperation.


This novel has a very strong opening. By the end of the first chapter King has already managed to establish a very creepy atmosphere, and managed to get the reader interested in finding out what is really going on. King manages to hold off the answers for quite a long time and when they come they do nothing to mitigate the sense of dread and eeriness that pervade this story.

Although this story takes place in a limited time frame, and is a long novel, there is little wasted space here. King does take his time coming to the conclusion but with everything that is happening there's no real feeling of there being any padding in this novel. It's hard to see how this could have been any shorter and still be written in the same style.
On the other hand there was one element of the story that I found totally unnecessary. There's a paranormal explanation to why the main characters came to be in Desperation that I felt was not needed. And what that paranormal element is, and how it is used to explain events in the later part of the story, felt cheap to me. That part of the story would in my opinion have been better left vague, and as it stands just feels like King chose to take the easy way to a resolution.

I've already mentioned the creepy/slash eerie atmosphere of the novel, and it is in my opinion the best thing about the story. King is in my opinion very good at creating an atmosphere of tension, dread, and eeriness in his novels, and when it comes to that element this is one of his best efforts. Even when this atmosphere is let down by an ending that is a bit easy it doesn't quite let go, and it lingers after the books final page.

The characters in Desperation are not among the best King have done. Despite the many pages the novel encompasses we don't get very close to most of them. And although the author character here is interesting to get to know, it is easy to get a bit tired of King's use of an author as one of the main characters in his stories.
That the main character who is closest to the paranormal explanation I have mentioned above comes off as a bit too perfect, or cliched if you want, is also a bit of a letdown.
Fortunately the novel also shows that King can carry the story without giving us the closeness to the main characters that we have in for instance IT.

I don't think this will be placed near the top of my favourite King novels ever, for me the paranormal explanation/element that I have already mentioned dragged it down. But it is still a very good story that offers the reader a lot of creepiness and horror.
If it was written by any other Horror author I would have called it great, but King has simply set the bar for his readers so high that from him this is a bit below what I've come to expect. I would however not in any way discourage people from reading this, and I know there are people who rate it much higher among King's works than I do.

It's a thrilling high-tension novel, that despite its flaws, is a very good read. Horror fans should absolutely  take the time to read this, and it has a Post-Apocalyptic feel to it that will make it interesting to those that enjoy that SFF subgenre.

NOTE: This is a companion novel to The Regulators, published under the Richard Bachman name. A review of that can be found here.